How was the Business Days of the Crimea in Moscow 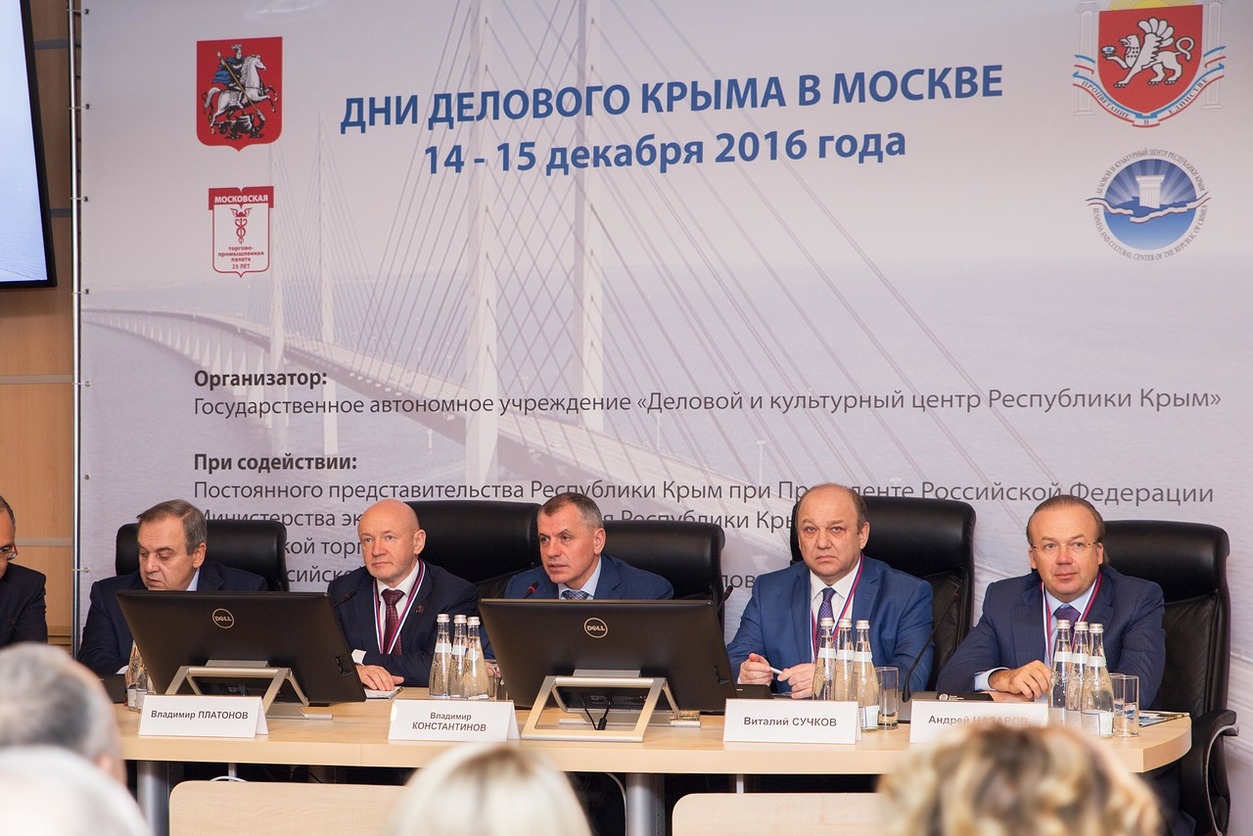 December 14, 2016 in the large conference hall of the Moscow chamber of Commerce and industry at the address: Petrovka str., 15, p. 1 gone are the Days of business of the Crimea in Moscow.

The meeting was opened by Georgy Muradov read out welcoming speech of the Head of the Republic of Crimea Sergey Aksenov:

“I cordially greet the participants and guests of the business forum “the Days of business of the Crimea in Moscow!

The accession of the Republic of Crimea to the Russian Federation marked a new stage in the development of economic complex of the region. Today, the Crimea is successfully embedded in the economic mechanism of our country, forms adapted to your own the specifics of the business environment in the international arena.

Huge assistance to the Republic in these directions have other constituent entities of the Russian Federation, primarily in Moscow. With this support, the economy of the Crimea is becoming more balanced, new business opportunities, increasing entrepreneurial activity.

The second business forum “the Days of business of the Crimea in Moscow” laid a stable basis for fruitful and multifaceted cooperation between the two regions in the field of investments, development of trade in goods and services, exchange of experience in business support.

I sincerely wish the participants and guests of the business forum fruitful work!”

Председатель of the State Council of the Republic of Crimea Vladimir Konstantinov during the forum, answering questions of journalists about the development of industry in the region, in particular, said: “we Have almost all sectors showing very good growth. First, the industry has shown very good growth. This is due to the shipyards that launched. Our businesses in the North of the Crimea began to work steadily. Here we have a lot of work due to the Federal authorities.”

Vladimir Konstantinov said that at the current pace of economic development, the region will become unsubsidized within a few years: “the Pace of economic growth in Crimea – one of the highest in Russia. This is the first year of decent growth was observed in industry is associated with the launch of two factories producing building materials, and placement of state orders at the enterprises of the defense sector. If we maintain this momentum, within 5-7 years, the Crimea will become unsubsidized region.”

The forum was held the conference “Free economic zone in Crimea. First results and prospects”, where were discussed the first results of the work in Free Economic Zone. Moscow and the Crimean entrepreneurs discussed the issues of interregional connectivity between the Republic of Crimea, the city of Moscow and Moscow region, shared experiences on the functioning of the SEZ in other constituent entities of the Russian Federation.

Участники Free Economic Zone in Crimea shared their positive experiences and suggestions for the improvement of the SEZ. That economic growth in Crimea are rising, demonstrated by the example of the enterprise the President of group of companies “KSK” Nikolay Shalimov. He, in particular, cited the following figures: “Our business two years in the free economic zone increased by more than 10 times. Today the portfolio of the company is more than 300 thousand sq. m. This residential and resort property. This year in the framework of the Yalta International Economic Forum we signed an agreement for 3 billion roubles, and next year we plan to increase this amount to 5 billion.”

The event also hosted a business forum in Moscow and the Crimean businessmen to discuss the prospects for new investment in the region. The forum was opened by Vice-President of Moscow chamber of Commerce Suren Vardanyan.

A presentation was made by: the Minister of economic development of the Republic of Crimea Valentin Demidov, the Director of the GAU “center of Kazakhstan” Yaroslav Ivanchenko, Director of the Foundation “international Yalta economic forum” Sergey Lazutkin.

The forum participants, among whom were representatives of more than forty Crimean companies came to a common opinion that traditional economic forum Business Days of the Crimea in Moscow contributes to the strengthening of contacts between representatives of different business communities, allows entrepreneurs to directly communicate with representatives of business and government of the Crimea, Moscow and Moscow region, allows you to plan and implement new joint investment projects, which in the end, beneficial for the Crimean economy in General.

– The purpose of our event is to acquaint the business community of Moscow with the working conditions in the Crimea and to help businesses of Crimea in search of in Moscow, business partners, said, summing up the forum, the Director of the GAU “center of Kazakhstan” Yaroslav Ivanchenko, And apparently this goal we have reached.